Welcome everyone to another blog here on BlueCollarBlueShirts.com. I got a lot of emails & tweets from readers here looking for a Game 3 recap, but real life beckons. I was able to attend game 3, but wasn’t able to get anything posted here due to my real job. 12 hour work days are brutal, and the 2 hour round-trip from home to work just sucks up my time.

Game 4 was a similar script to Game 3, except Lundqvist was a little bit better as goalie in Game 3. The Rangers had trouble mustering up shots, the powerplay is out of wattage and the referees might as well change their white & black stripes for yellow & black stripes.

It’s funny, going into this series, the one advantage the Rangers had was at the goalie position. Instead, the two rookie back-ups from Pittsburgh, Jeff Zatkoff and Matt Murray, have dominated Henrik Lundqvist & the NY Rangers. Both goalies make $8M less than “KING” Henrik Lundqvist, yet have out-performed him for the majority of the series.

This all goes back to what I’ve been saying for two years. You don’t pay a goalie 13% of your salary cap. You don’t pay an aging player, no matter what the position, the most amount of money on your team until he’s 40 years old. The Rangers are a sinking ship of bad contracts, with Rick Nash, Marc Staal, Dan Girardi and Henrik Lundqvist as the Mount Rushmore of bad contracts.

Since Lundqvist received the highest paid goalie contract in all of the NHL, two years ago, in the salary cap era, he’s done the following:

Let me reprint something I wrote at the end of last season on this blog. Let it sink in again, because several of you still argue with me on this:

NHL TOP GOALTENDING SALARIES for the 2011-2012 Season per year

(To me, Hank was at his absolute prime in this season)

NHL TOP GOALTENDING SALARIES for the 2012-2013 Season per year

NHL TOP GOALTENDING SALARIES for the 2013-2014 Season per year

IN OTHER WORDS – HENRIK LUNDQVIST IS OVERPAID. YOU DO NOT NEED TO GIVE 13% OF PAYROLL TO A GOALIE IN TODAY’S NHL!

I am not talking about Lundqvist’s skills right now, although they are diminishing each game as he gets older and regresses. The bottom line, in this cap era NHL, you just can’t pay a goalie this amount of money. Yes, we all know I’m the Talbot guy. I’m not a Raanta guy, as many would lead you to believe, just because he’s the back-up.

Think about Talbot’s run last year. He had a great season once he got used to Edmonton. Edmonton had a horrendous defense and were missing their best player a majority of the season. If Lundqvist and Talbot traded places, I still think the Oilers would finish how they finished and the Rangers would be slightly better.

Now, just think – if Talbot was on the Rangers this year & NYR moved Hank during the off-season, the Rangers would’ve had $8M extra to play with. Imagine having Justin Williams? TJ Oshie? Instead, the Rangers biggest move of the season was making a deal for “Point-Per-Playoff-Game” Eric Staal, who the Rangers failed to realize, hasn’t played a playoff game in nearly a decade. The Rangers love to go for players over-the-hill and past their prime.

It’s not just the goalie either.

Look at the young talent the Rangers have got rid of during this run of deep playoff exits:

I don’t know what emotion I’m feeling right now. Anger. Frustration. Fury. Acceptance. Unbridled sass. Who knows? There’s no word to describe it. I just have a big case of the “I-Told-You-So” in me. You don’t sign a goalie for that much money. You don’t make the trades you did. You don’t give up draft picks. This is all stuff I’ve been saying when these acts happened. Just check the archives on the right hand of the site.

Another I TOLD YOU SO, was when I said the Rangers should’ve lost Game 82. Again, many of you argued with me, saying stuff like, “IT’S ALL ABOUT PRIDE. YOU DON’T TANK. IT WAS A GOOD WIN FOR MORALE. IT’S BAD KARMA TO LOSE.”

Down 3-1 to Pittsburgh, how’s that morale now? I said it a bunch of times, the Rangers should’ve lost and took the easier route through the Atlantic division. Even if, by some miracle, the Rangers pull this out of their ass, you still gotta play Washington, who will give this team a bigger ass-raping than Marcellus Wallace received in “Pulp Fiction.” That’s with the gag and all.

I know, I know, the Rangers came back, down 3-1 on Pittsburgh two years ago. Those were two different teams. Maybe if Lundqvist’s mother dies, like how the death of the mother of Martin St. Louis, propelled the team to an emotional comeback in 2014, then maybe they got a shot. I just don’t see it though. This team has been consistently inconsistent all season, and to envision them winning three straight games is more improbable than Donald Trump & Oprah Winfrey having a baby together.

Let’s get to the box score, then talk about everything else. As always, the box score comes from ESPN.com, because NHL.com these days is uglier than the Rangers PP:

(Oh, and per the norm, my comments are in italics:)

So why did the Rangers fail to win this game? In short – EVERYONE SUCKED. This was really the worst playoff loss the Rangers have had in the last 4 years, when this core started making deep runs. To expand on why the Rangers lost, here’s why the Rangers got massacred tonight, in no particular order:

The Rangers look defeated, lifeless, and ready to play golf. Again, I still don’t know why they chose to beat Detroit in Game 82. It’s something that really changed their playoff course.

The Penguins, quite frankly, are the better team. They could’ve been avoided. The Rangers, delusional as some of their fans who think they would win the Cup, thought they would march right through them.  It’s depressing and pathetic that the Rangers can not beat rookie back-up goaltenders.

Some may say I’m too hard on Lundquits, but he’s the highest paid player on the team. These games have happened far too often this season. He’s being paid to steal games, not be the cause of the loss. Again, you need offense to win Stanley Cups. The Rangers don’t have it. Even if the Rangers were down one goal all game, like they were in Game 3, you don’t have one player that can take over a game and tie it up.

I see a lot of Ranger fans saying “FIRE AV!” I don’t agree with that. AV can’t stop shots. AV can’t score goals. If the Rangers aren’t motivated to win games, it’s not on him. It’s the players themselves.

If you’re looking for any positives in tonight’s game, all I can say is at least Brady Skjei is ready to be an everyday starter in this league. He should have Boyle’s spot next season.

I love when people say “You’re not a real fan” when I’m realistic. There is one thing to be a fan, another to be delusional. As I said at the beginning of the season (Check the archives on the right hand of the site), why would anyone think the Rangers would win the Cup when they did nothing to better their roster while every other team in the division bolstered their troops?

There is no way this crop of Rangers will beat the Penguins in 3 straight games. I might as well sell my Game 6 tickets now. In fact, Dolan should refund me for those tickets and that piece of shit should refund anyone who paid for tickets to tonight’s game.

I’ve said it before, ownership is a huge issue for the Rangers, as they have an owner who still believes the 1980’s Oilers is still relevant in today’s NHL. All Dolan cares about is money. I wish a Steinbrenner or Trump owned this team. They wouldn’t put up with this shit and would hold any player accountable, no matter how huge the salary.

It’s kaput-time for the Rangers, whether it’s in 5 or 6 games. From there, I’m hoping Ovi or Jagr pull it off. Any team besides the Islanders!

No point in talking about what needs to be done in the off-season. You guys already know, and I’ll save that blog once this dreadful season is over.

The Rangers embarrassed themselves, their coaches and most importantly, their paying fans tonight. What a fucking disgrace.

All I can do is hope for the impossible, and hope for 3 straight wins. I’ll be watching game 5, and as always, be chanting…

See ya Saturday night/Sunday morning for a Game 5 recap/obituary. 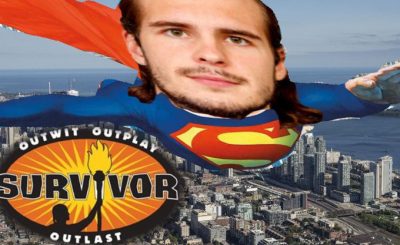 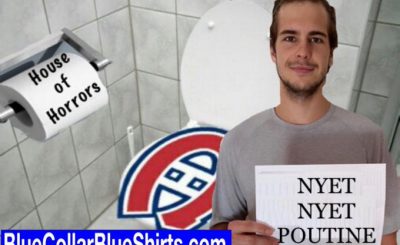 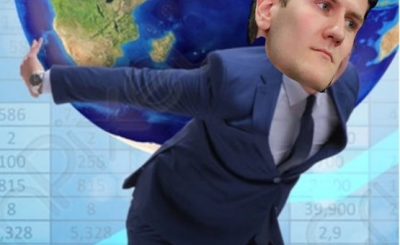 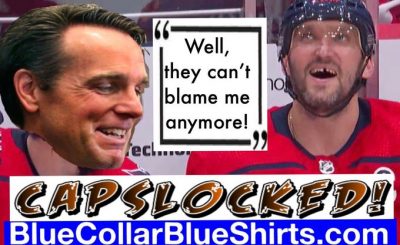