Welcome everyone to another blog here on DOINOW.com. As always, check out the archives on the right hand of the site for previous columns and opinions.

For the past week, I’ve had various friends and my girlfriend ask me, “What exactly goes on at Francesacon?” I didn’t know how to answer the question. I figured it would just be anywhere from 100-200 people dressed up in bad gray wigs, slugging diet coke and finishing their sentences with the word “ok”. When I left Francesacon, I knew how I would be able to answer this question next year – Francesacon is one of the greatest experiences ever.

Francesacon, the brainchild of Ron Haraka and Michael Leboff, two young bucks, was created last year. On an aside, it turns out I’ve actually known Michael for a while, as he bartends at one of the bars I visit! Who knew he was one of the biggest mongos of them all? Maybe it’s time to walk away from the Broadway machine & Miller Lites and talk about Mongonation instead with young Mike! And for Mike – just give me 5 minutes and I’ll be out of heah!

Last year, during Superbowl week, Francesacon was a bar crawl for Mike Francesa fans. Bill Buchanan, who does the Mike Zaun American history videos, as well as Michael Benevento, who does a great Chris Russo impersonation, were the stars. It was for the fans, by the fans.

This year, when Francesacon II was being discussed, interest was so high, that Haraka & Leboff booked an enawmous venue for someone who can’t truly only be yumen, the sports pope himself, Mike Francesa. Francesacon II, held on January 24th at Irving Plaza drew 1000+ mongos. For myself and the 1000 or so people in the building, it was one of the greatest sports experiences we’ve ever had.

As a customer and fan, Francesacon 2 was a raving success. In fact, it was such a success, I think the event coordinators are going to need a bigger venue. Benevento, the Russo impersonator, joked about MSG, and while that probably isn’t feasible due to costs, it is no joke that Francesacon 3 will need more space.

From 12pm-2pm, Francesacon 2 was just an excuse to day drink on a Saturday with fellow Mike Francesa fans. What made it great, aside from the sea of Francesa fan made t-shirts and people dressed up in various costumes, in tribute to Francesa, was putting faces to some of the twitter names and realizing that there are people just as insane as you. Even minah Francesa related trivier and minutia were all discussed.  When Francesa would eventually take the stage at around 2:45 I felt like I was at a white power rally and professional wrestling show all at once. From the non-stop chants in unison to people cheering like Stone Cold Steve Austin stunning Vince McMahon, you couldn’t bottle the phonetic energy at Irving Plaza on that Saturday afternoon.

Before getting into the meat of the show, let’s get the biggest positive fact into the limelight.  All profits from the event went to two charities – the Children’s Network for Hope and the Theodore Atlas Foundation. Both charities work with sick and needy children. I don’t know what it costs to rent the Irving Plaza, but with 1000 or so people there at $15 bucks a pop, I’m sure sizable monies were raised. Even better, a portion of the beer sales was going to charity as well. When you drink expensive $9 beers, at least you feel better about it. Trust me, I’ll drink like a pig at Francesacon and be happy about it, knowing the money is going to a good cause. I never have that feeling with those $10 beers at MSG! Screw  you Dolan!

From 2pm-2:30pm, Mike Zaun & Michael Benevento took the stage. Their material was a hit, as everyone loved the shots at that cocksucker wannabe, Michael Kay. When Mike Zaun opened up talking about “BAWLZ”, the crowd was roaring. Honestly, Zaun & Benevento could’ve done a racist, homophobic, communist, terrorist bit and people would’ve been cheering like a winner on “Price is Right.” It was their day. It was their audience. Nothing was going to fail with this crowd. The crowd ate it up and the two impersonators delivered the best steak & lobster any Mongo could’ve ever asked for. Making things even bigger, was that Carl Banks even showed up to play off the impersonators. It was the perfect cherry on top.

At around 2:40pm, a roar broke out from the upper section of the Irving Plaza. A gray haired man with teeth whiter than ivory tusks parted the sea of people like Moses. How fitting for the sports pope. Mike Zaun saw it coming and you could hear the glee in his voice. Listen, I did independent professional wrestling for 10 years. I understand a positive crowd reaction. In the wrestling business, we call it a “pop”. When Mike Francesa’s feet hit that stage, the crowd erupted like Hulk Hogan slamming Andre the Giant at Wrestlemania 3. Being at the Irving Plaza, I felt like I was at an ECW show. It just had that vibe of everyone being united and on the same page, for the same cause. It was pure electric.

I posted Francesa’s appearance in the video above. The pope spoke. The congregation praised him. You can see how much this really hit Mike. I don’t think Mike truly understood what MongoNation was or the effect he has on people’s lives. He’s with us 25+ hours a week.

What really hit me, at near 33 years old, is that I felt like I was one of the oldest fans there. I feel like most of the crowd don’t remember the Yankees without Derek Jeter. That’s how I peg myself as old! I’d say the majority of the crowd was 21-27 years old. I knew that most of the social media mongos were younger, but I didn’t realize how many of them there were either. I think Francesa finally realized as well, how vast his audience is. You’re not gonna get the Bruce from Bayside’s or Brett from Long Island, or any other famous older caller, going to, what basically boils down to a frat party for a good cause, you’re going to get another demographic of Mike’s huge numbah one fanbase.

It’s amazing how Francesa, who is truly numbah one in the ratings and paychecks, has this demographic. It’s hard for twenty-somethings to relate with a 60 year old man who sometimes resembles a lesbian grandmother with his choice of clothing, but the connection & bond is there. The love is there. Mike, who watched his impersonators riff for a bit, was into it. He gets it. While he may sometimes act ornery or stubborn on-air, at the root of it all, he loved this. You can see it in his face he truly appreciated it and didn’t know what to expect. I wish I could hear the big guy, when he got home, describe to his wife what Francesacon 2 was all about. The guy had to be beaming the whole way home and probably didn’t mind if Julio hit a little LIE traffic. 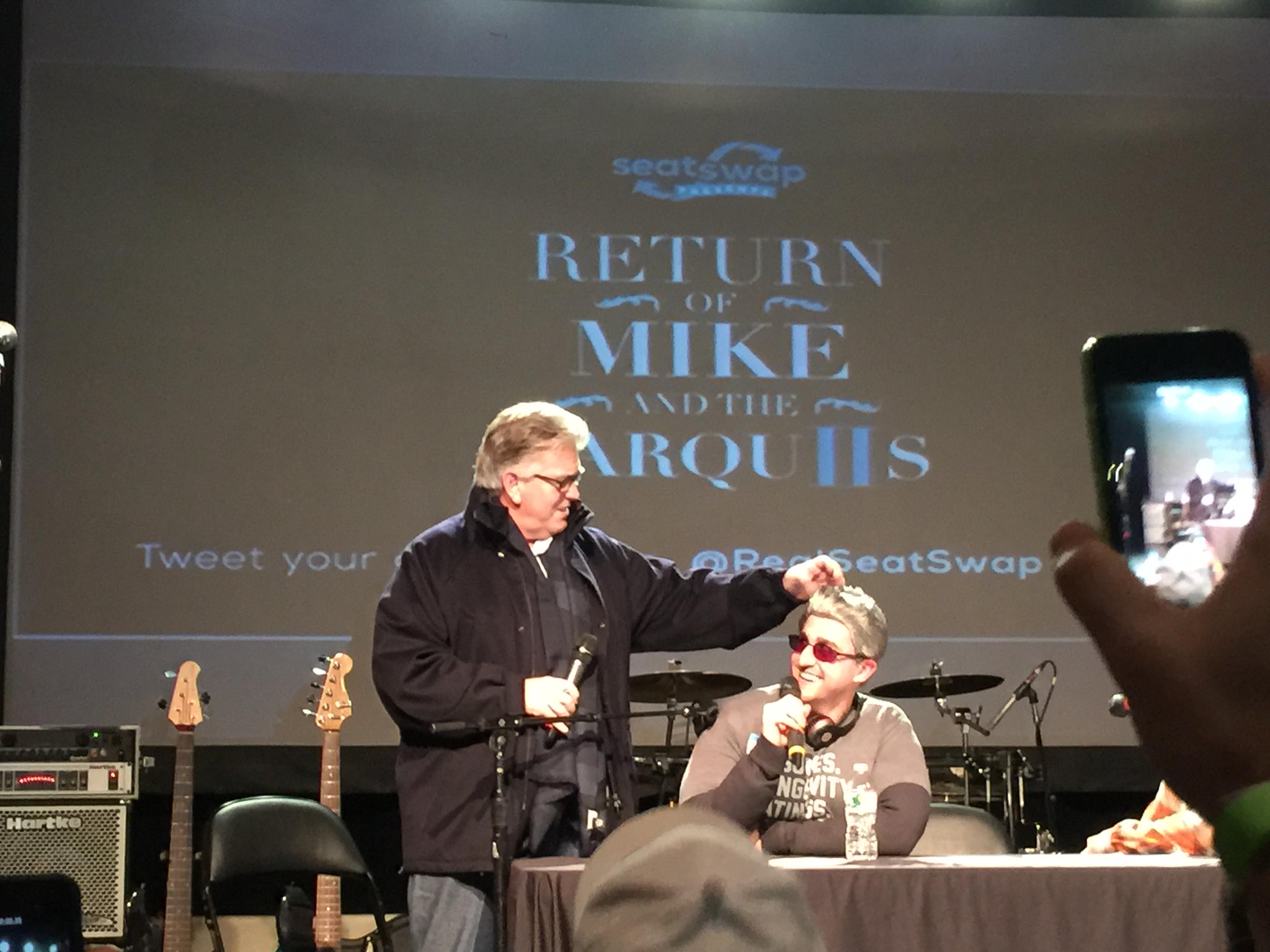 What really impressed me is how Mike knew the audience and how to work this crowd. Like a politician or a babyface professional wrestler, Mike made it clear that the fans weren’t gonna line up to get a picture-  he was going to come into the crowd and walk right into the smell of sweat & stale beer cans. Despite there being 1000 people, Mike took a picture and signed anything. Keep this in mind – this was a for the fans, by the fans, convention. Mike didn’t have to show up. He didn’t have to visit with his legions. While he’s known as “The King”, he was a man of the people. For people who already were fans of Mike, this was just a great experience, as it’s always great to know your heroes are good people. For the people who are not Francesa fans, his appearance here would’ve turned you.

If there were any negatives about the event or suggestions I would make to the coordinators, I would put more stuff up for sale. Maybe next year Mike can sign 500 8×10’s before the event and sell them off for charity. Selling different color T-Shirts would be good too, because it just looks like the same T-Shirt as last year. As this craze continues to grow and grow, I think you’re not far off from having vendor tables and other people from the sports world attending. I don’t see Francesacon ever going “off duh aiyah”, as a day like this and great word of mouth, will make this event be something everyone looks forward to. I know I am. Let the countdown begin for Francesacon 3!