Welcome everyone to another blog here, on DOINOW.com. As always, you can find the archives on the right hand of the site, as well as find all of our new features. Don’t forget as well, to try the beef barley soup at the Bold Donoughes, don’t drink & drive, don’t fart and cough (It can lead to massive sharting) and always, and I mean always, use “IN CAM WE TRUST” as your personal mantra.

IN CAM WE TRUST. I’ve been saying it all season. The biggest skeptics are now jumping aboard the Talbot Train, which I’ve been conductor of from day one. It’s so funny to see how many people talked shit about Talbot by saying “He’s not a starting goalie” or “Hank is still better” or “He’s just a back-up” who are now saying “Talbot is starting goalie”, “Talbot is a huge trade asset” or “Talbot could replace Hank.” Where were all you people when I was saying this in September?

King Contract aka King No-Cup, the highest paid goalie in the NHL, despite never winning a Cup & being a hypocrite (He says he wants to win at all costs, then demands Torts to be fired & demands to be highest paid goalie in the NHL) is a complete albatross on the Ranger’s salary cap. Guess what? You got a guy, in Cam Talbot, getting paid $8M less and playing head and shoulders above Hank this season. I don’t want to here about Hank’s past. Face it. Take the blinders off. Hank was having a horrible season, being blown out 9 times, having a terrible GAA and wasn’t even considered for the All-Star Game, even after 2 goalies, who were voted in, were injured.

We all know I’m the leader of Talbot Nation. I won’t argue my Talbot fanboy status here. However, I got to say it again. Once the soft Swedish Fish comes back, it’s Cup or nothing. It’s “IN CAM WE TRUST OR HANK WE BUST.” Hank will return with the most pressure ever in his career, due to the MSL & Yandle deals and because you got a goalie who should be starting for the rest of the way. You wouldn’t pull Tom Brady for Drew Bledsoe in 2002 and you shouldn’t pull the hottest goalie in the NHL today for a guy who has done nothing but throw blame on his teammates when things don’t go his way.

Don’t take my Talbotism words as the gospel. Check out this, from NYRANGERS.com, after Talbot stoned the Washington Capitals 3-1 tonight:

You want to pull this guy, right now, for a guy who has never won a Cup, blames his teammates after losses and is more concerned about doing a TV show with celebrities than with his teammates? I’m sorry. Hank has been great. He’s a HOFer. HOWEVER, RIGHT NOW IN 2015, TALBOT IS THE HOTTER HAND. I mean look at the teams Talbot is beating. He’s beaten a murderers row of playoff teams and in convincing fashion. Furthermore, not only are the Rangers the best team in the Metropolitan division, they are THE BEST TEAM IN THE ENTIRE LEAGUE. Why would you fuck with that mojo right now?

The Rangers had their biggest win of the season on Tuesday night, beating the Islanders 2-1. Sure there have been better games, but don’t fool yourself, each game is bigger than the last, as we head towards crunch time. If the Rangers lost to the Islanders, the Islanders would’ve had a 5 point lead on the Rangers, even with the Rangers having 3 games in hand. As a result of tonight’s 3-1 victory over the Capitals, the Rangers took a 1 point lead in the Metro division and have the 3 games in hand. Furthermore, as a result of several recent Western Conference losses, the Rangers are the best team in hockey and would win the President’s Trophy, if the season ended today.

Again I must ask, you really want to take Talbot out for a guy who has played like crap for the majority of the season?

Something else Hank wasn’t doing as a starter this season was making saves like this one, that Talbot made, robbing Nicklas Backstrom

The Rangers and Capitals met in another NHL on NBC game on Wednesday night. I really hate these games, as I’ve talked about in previous blogs, as I miss the MSG presentation and commentating. The NBC replays, or lack thereof, are downright embarrassing.

The Rangers got themselves in the same trouble they have been having as of late, losing a ton of faceoffs, taking bad penalties, not converting powerplays for goals and turning over the puck. However, the Rangers maintained their composure, hustled and had Talbot bail them out on any mistakes.

I’ve talked about the third line a lot here in these blogs. Once again, Hags/Miller/Hayes were the best line for the Rangers. Hags is going to be a free agent this year. I hope the bloated contract his fellow countrymen received doesn’t prevent Hags from remaining a Ranger. He is playing the best hockey of his career right now. Once again, Hags busted up powerplays while on the PK and would score the first goal of the game, after a beautiful pass from Rangers rookie, Kevin Hayes.

What more can you say about Hayes & Hags? Hayes is not only the future of the Rangers, he’s the right now of the Rangers. Hags is playing out of his mind right now. The addition of Miller to their line, on most nights, is the most productive line on the best team in the NHL.

However, the Rangers Dan Boyle got called for a questionable interference call against Joel Ward, setting the Caps up on the PP. It should’ve been a no-call, because Ward was just as guilty. However, the refs have been more inconsistent this year than any other time in the NHL. Wait until these refs start making up embellishment calls come playoff time.

While on the PP, the Caps were on fire. Rangers, as usual, couldn’t win a faceoff and the Caps dominated the puck. Jesper Fast was beat by Ovechkin, then waved his stick wildly on Ovi’s shot. Fast wound up deflecting the puck in his own net. Talbot can’t worry about his own guys scoring on him too, and the Caps tied the game up 1-1.

With less than four minutes ago, the third line was at it again. It was MILLER TIME for NYR, as once again, Hayes found a linemate, this time in JT Miller and Miller put a wrist shot past Holtby. It was a huge momentum goal, especially with little time left in the period.

The second period the Rangers showed more life and outshot the Caps. No hit was bigger than Dan Girardi dropping Beagle with a clean shoulder-to-shoulder hit. It looked like Beagle was puking afterwards, as the camera immediately cut away from him heaving in the bowels of the building. New acquisition, Curtis Glencross decided to defend his new teammate and took a dumb retaliation penalty. However, once again, the Rangers PP was anemic and they couldn’t score a goal.

On the other end, Talbot was lights out, stopping Caps PP shots, stoning Ovi twice and making the save on Backstrom, which was posted earlier in this blog.

The Rangers & Caps, after their scoreless second period, headed into the third. The Caps seemed more hungry, producing a flurry of shots, as the Rangers just went into defense mode. The Rangers seemed more content to clear & dump the puck, rather than generate pure scoring opportunities. Whether that was the case or not, I don’t know, but that’s how it looked.

Talbot was tested and he would finish with 28 saves. The biggest play of the period happened when Kreider intercepted Carlson’s pass, rushed up the ice with Marty St. Louis by his side, and Marty easily scored on the 2-0 rush.  With less than three minutes to go, this essentially sealed the game at 3-1.

The Caps pulled Holtby and as has been the case this season, the Rangers had trouble finding the empty net. They wouldn’t need it as the 3-1 score remained and the Rangers are feeling very fucking Rooseveltesque right now, because they sit at top of the whole entire NHL standings. Again, we all know what happened the last time the Rangers won the President’s Trophy!

While the Rangers are playing their best hockey of the year, there are causes for concern, especially when it comes to faceoffs and the powerplay. It is two areas the Rangers will have to focus on during these next two days off.  However, as a Rangers fan, you have every right to jump up and down and if you were a Talbot guy like me, feel free to scream “IN CAM WE TRUST!”

The Rangers are hotter right now than any other time last year. They are getting goals from everyone, finding different ways to score and their defense has been incredible. They are playing pure team games and everyone is contributing besides Tanner Glass. Sure, the playoffs are not the regular season, but you have to love the momentum the Rangers have right now.

The Rangers return for a weekend back-to-back slate, in Buffalo on Saturday and against the Panthers at home on Sunday. I think it’s all but a given that Skapski starts on Saturday. The game is custom made for him once again. Buffalo wants to lose and Skapski wants to win. Perhaps against one of the worst teams in the league, the Rangers can jumpstart their powerplay. Let’s face it, Talbot just beat the best teams in the league these last 5 games and goals should come a lot easier against the Sabres & Chad Johnson.

A big shoutout to the man they call JEFFREY and Margaret from the 5 star establishment at the Bold O’Donoghues, which hosted the game for Mr. JEFFREY SAMARDZIJA & I! Try the fresh produce and the black bean soup!

I’ll try to squeeze in a column before Saturday, but if not, I’ll have the Sabres/Rangers recap late Saturday night.

IN CAM WE TRUST 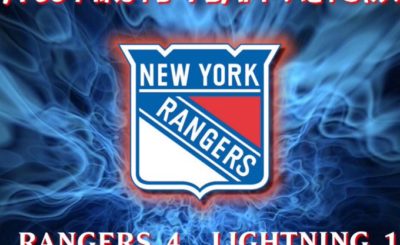 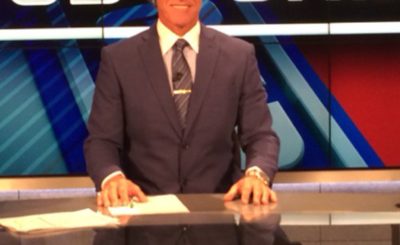 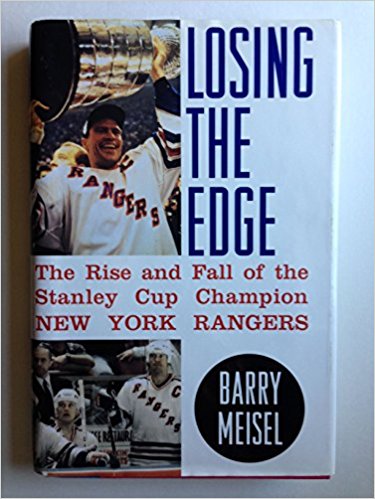 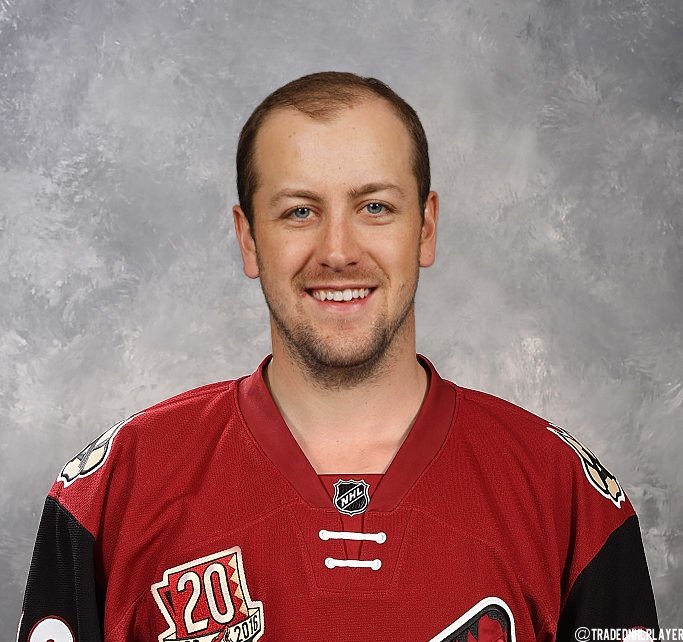 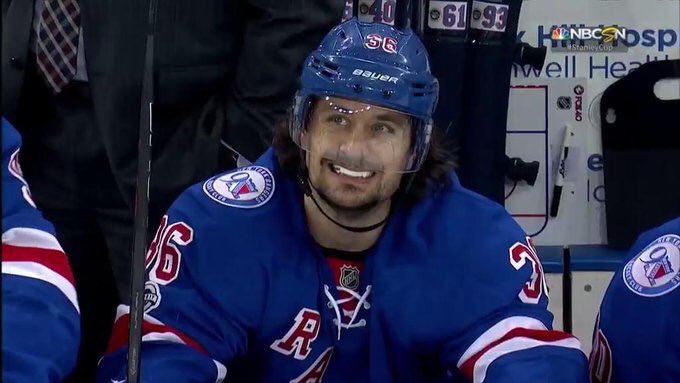 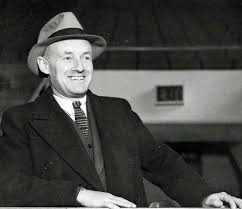